Brexit, project fear, brains, racism inequality and the other 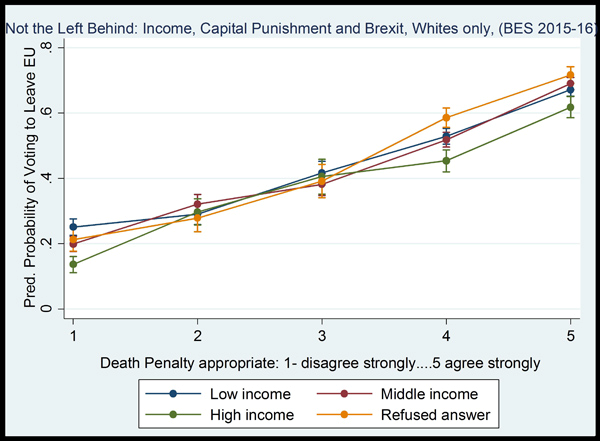 Brexit, project fear, brains, racism inequality and the other

Many of us are shocked to the core by the referendum result, and even more so by the campaign and the way it was conducted, especially its racist undertones. In many ways this was a protest vote, and whatever his weaknesses Corbyn has understood that inequality, uncertainty and the increasing power of smaller elites has impacted powerfully. What the left seem not to have learnt from its history lessons is how at times of serious crisis people become inward and conservative and indeed, often xenophobic and distrustful of the other. This makes more sense when we understand just what fear, anxiety and anger does to the brain.

We know that stress and worry wires our brains for distrust. When the chips are down and danger looms we cant afford to be open and trusting. Very anxious fearful children, as well as abused and traumatised ones,  are much more anxious, and suspicious of difference (Williams et al., 2015, p1428–1435), and the parts of their brain involved in fear, such as the amygdala, are highly active (Ohashi et al., 2014, p88S–88S). People with more social fear tend to be more anti-difference, ant-immigration and, pro-segregation (Hatemi et al., 2013, p279–293). It is no coincidence that the research done so far has shown that people on the political right tend to have higher activation in such fear related brain areas whilst those on the left have more activity in areas involved in curiosity, self reflection and empathy (Kanai et al., 2011, p677–680).

Sadly humans have an in-built propensity to prefer others who look like us or sound like us, something seen even in babies of a few months old, or less (Kelly et al., 2005, pF31–F36; Liu et al., 2015, p500–11). Thus the potential for racism and a fear of difference seems to be engrained in human nature, but is exacerbated in the face of fear and uncertainty, which is when most of us tend to cling to the known. This presumably made a lot of sense in terms of increasing survival in dangerous situations in our evolutionary past. Such an innate fear of the other can be reversed though with exposure to other races, even in infancy (Anzures et al., 2012, p484–495), and it is no coincidence that it was the most multi-racial conurbation, London, that came out so strongly for Remain. We have seen the possibility for more empathy and openness, for example in the changing attitudes towards gay rights and sexuality in general; change is possible but less so when we feel threatened.

We are learning that those on the political right tend to react differently to fearful experiences, seemingly becoming more rigid (Carraro et al., 2016, p78–84).   For example  some research (Renshon et al., 2013) on the effects of anxiety on political attitudes, showed how fear tends to make us more suspicious and  wary of others. In one study  138 men from Cambridge, Massachusetts watched films and then answered questions. Some watched relaxing images such as of beaches and palm trees, or heard soothing music. Others had to watch Sylvester Stallone’s rather terrifying film, “Cliffhanger.” The latter group not surprisingly had  heightened physiological reactivity after watching two minutes of rope dangling peril. Maybe more worryingly watching this led them to have stronger anti-immigration and prejudiced attitudes.

Thus fear, anxiety or anger generally turn down our empathy circuits,  and leads us to function from what are often considered more primitive brain pathways, those that we share with our less sophisticated mammalian and reptilian ancestors. When our backs are against the wall we need to fight or flee, not to be interested in other people’s feelings.

Lots of other research is pointing in a similar direction (Schreiber et al., 2009, 2013, pe52970). During the risk-taking tasks, Democrats demonstrate much greater activity in the left insula, a region associated with social and self-awareness. Republicans on the other hand use their right amygdala more , a region involved in the body’s fight-or-flight system.  Amazingly brain activity in these two regions alone predicted if  a person is a Democrat or Republican with 82.9% accuracy, which is much better than any other predictors we have, whether looking at genes or parental political allegiance.

This kind of research has been coming through thick and fast recently. Another study (Newman-Norlund et al., 2013, p341) found  that democrats tended to have higher activation in brain areas central to understanding other people’s points of views, such as the inferior frontal gyrus, supramarginal gyrus and angular gyrus.. Republicans tended to process social experiences in brain areas which suggested  a tighter, less outward focussed attitude, one which relied more on loyalty and tradition. This is what Johnathon Haidt found as well in his study of the morality and politics (Haidt, 2012).

This might also explain why we see more conservative political views as well as racism in those who also have guns at home in America, and are more opposed to lenient immigration and other liberal policies as Kerry O’Brien found in a recent study (O’Brien et al., 2013, pe77552). A state of mind in which fear is prominent often gives rise to more suspicion and less likelihood of caring for others. Perhaps this links with the Brexit-related arguments of Kaufman, writing recently for the Fabian society ( Brexit Voters: NOT the Left Behind, no date). He showed how  Brexiters were also more likely to be supporters of capital punishment, see graph below, and also more likely to want to harshly punish those who commit sex crimes.

Kaufman argues that there is a ‘ close relationship between feeling fearful of change, desiring certainty, and calling for harsh penalties for criminals and discipline for children. These are people who want a more stable, ordered world. By contrast, those who seek change and novelty are willing to embrace immigration and the EU.’

What much research is suggesting is that when people are suspicious, fearful and  things are going badly, they tend to have more activation in areas of the brain such as the insula, central to disgust, and fear, and less activation in brain areas to do with empathy, curiosit, trust or openness to novelty..

I am not arguing that ‘it is our brains what did it’, quite the opposite. Our brains are profoundly sculpted by and responsive to our experiences.  Research about the brain and trauma, abuse or stress (Bluhm et al., 2009, p187–194; LeDoux, 1998; Perry, 2002, p79–100; Schore, 2009, p107–141) has shown how when our threat systems are engaged, when we sense danger, then the bodily and brain areas central to social engagement  (Ogden, 2006; Porges, 2011) are turned off. This is basic survival. However the brain areas that are dominant in fear, anxiety, threat or anger in fact work against those that are central to cooperation, empathy or caring for others, and they can rather give rise to much more small-mindedness and conservatism. I suspect this is the explanation for many of the findings which suggest that just when you might think people might be protesting, and wanting to join together to fight for a better world, in fact they often become more conservative, suspicious  and less politically active.

However there is hope. As Christopher Boehme found (Boehm, 2012), while we too easily fear the other and in fear we also become more conservative, we also have an evolved legacy to fight for justice and not to let injustice be tolerated. In our hunter gatherer past he showed many examples of autocratic, greedy or unfair leaders being overthrown, and the roots of this lie in cooperative joint action, banding together to fight for a belief. This is what we see in all social movements, from Occupy to major revolutions, and maybe that is what we need to galvanise in this moment. A sadness for me is that in the campaigning Project Fear ruled both sides’ arguments, with Remain spreading fear about economic ruin and the like, devices bound to stir up conservative fear responses. Unfortunately too few were standing up and fighting for how we are better together, for what we gain from immigration, multiculturalism, and being part of a greater whole which can, whatever its weakness, fight for a better and safer world.

Brexit Voters: NOT the Left Behind (no date). Fabian Society. Available from http://www.fabians.org.uk/brexit-voters-not-the-left-behind/ [Accessed 3 July 2016].

Carraro, L., Castelli, L. and Negri, P. (2016). The hand in motion of liberals and conservatives reveals the differential processing of positive and negative information. Acta Psychologica, 168 78–84.

Hatemi, P.K. et al. (2013). Fear as a Disposition and an Emotional State: A Genetic and Environmental Approach to Out-Group Political Preferences. American Journal of Political Science, 57 (2), 279–293.

Perry, B.D. (2002). Childhood experience and the expression of genetic potential: What childhood neglect tells us about nature and nurture. Brain and mind, 3 (1), 79–100.

Schore, A.N. (2009). Attachment trauma and the developing right brain: Origins of pathological dissociation. Dissociation and the dissociative disorders: DSM-V and beyond,107–141.