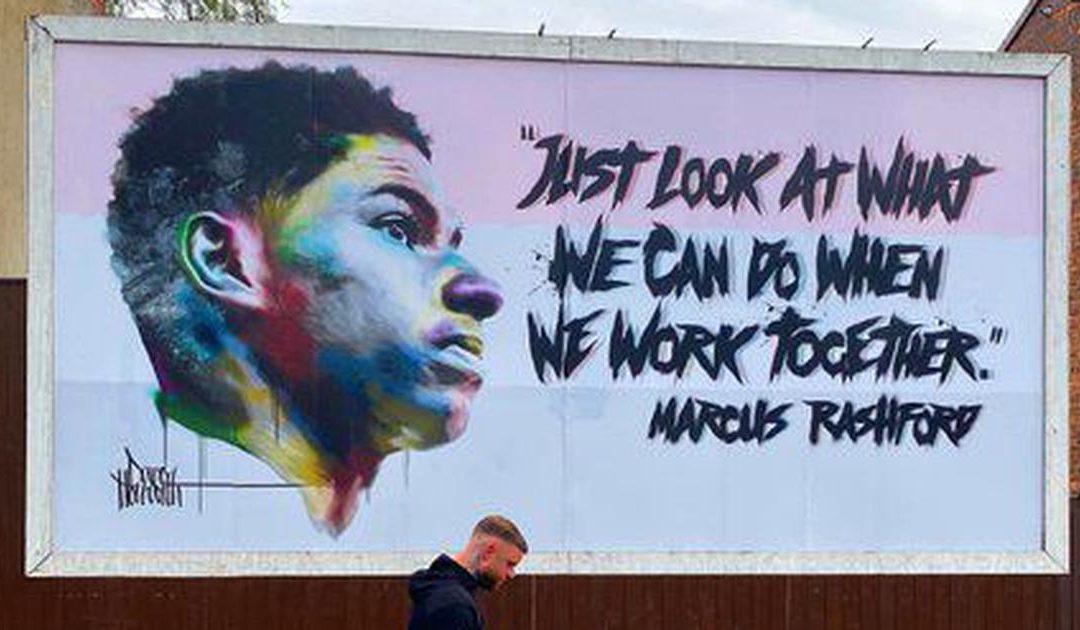 I was as sad as anyone about England’s defeat in the Euros. However, the assaults on Danish and Italian fans, including children, and the horrendous racist attacks on courageous young black footballers, were shocking and indeed shameful to behold. Thankfully, people are at last waking up to the pernicious effects of racism, and the constant micro-aggressions people of colour experience day-in day-out, often out of consciousness. Thankfully too, we are starting to see increasing levels of protest in the aftermath of the murder of George Floyd, awakening a new generation to the extent of racism, prejudice, and discrimination.

We cannot hide any more from how racism causes huge emotional and physical pain, with repercussions on the minds, bodies spirits and hearts of multiple generations of people of colour. When we do imagine the lives of people who receive such non-conscious signals of distrust, fear, contempt and dislike day-in day-out it is hard not to feel both anger and compassion. It is no coincidence that black people living in more racist communities have higher levels of nearly all worrying health related biomarkers, from shorter telomeres to higher allostatic load. [1]–[3]. Racism is internalised not just in minds, but becomes embodied  [4] in a way the leads to the very health issues that have predisposed to Covid mortality, such as obesity, diabetes and other metabolic issues [5].

Groupness is a mixed blessing. Belonging makes us feel better, and is one of the roots of genuine mutual care and cooperation. However, it can also lead to dehumanisation of others and inhibit cooperating with those we deem different. Importantly we know that oxytocin, a hormone central to bonding, mutual trust and cooperation, increases empathy, yet the same neurochemical has a darker side. When people are in close-knit and bonded groups, such as the huddles of sportsmen or close families, oxytocin levels rise. Yet people given oxytocin intra-nasally become more likely to help those in their own  group, and less likely to aid those from other groups [6], a finding found in Belgium between Walloons and Flemish citizens, and in another study, in Israel between Hassidic orthodox and non-religious Jews [7]. 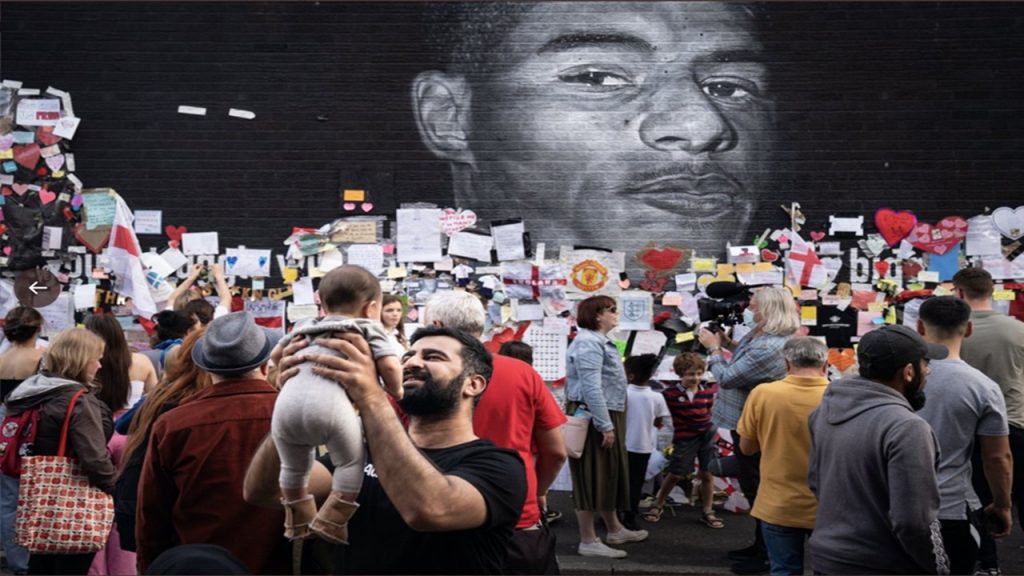 Yet I want to also pay attention to the social forces that give rise to discrimination, inequality, racist behaviour, discourse, and actions, all kept in place via structural inequality. We should remember how racism has served a purpose for dominant groups, how in many societies status and economic advantage is linked with subtle gradations of skin colour. Think of the economic gain in slavery and now in the US prison system, exploiting for profit many more Black people than ever were slaves. We need to remain alive to the bigger political questions and remember that racism and prejudice are an issue for us all as individuals, but are also social and political issues. 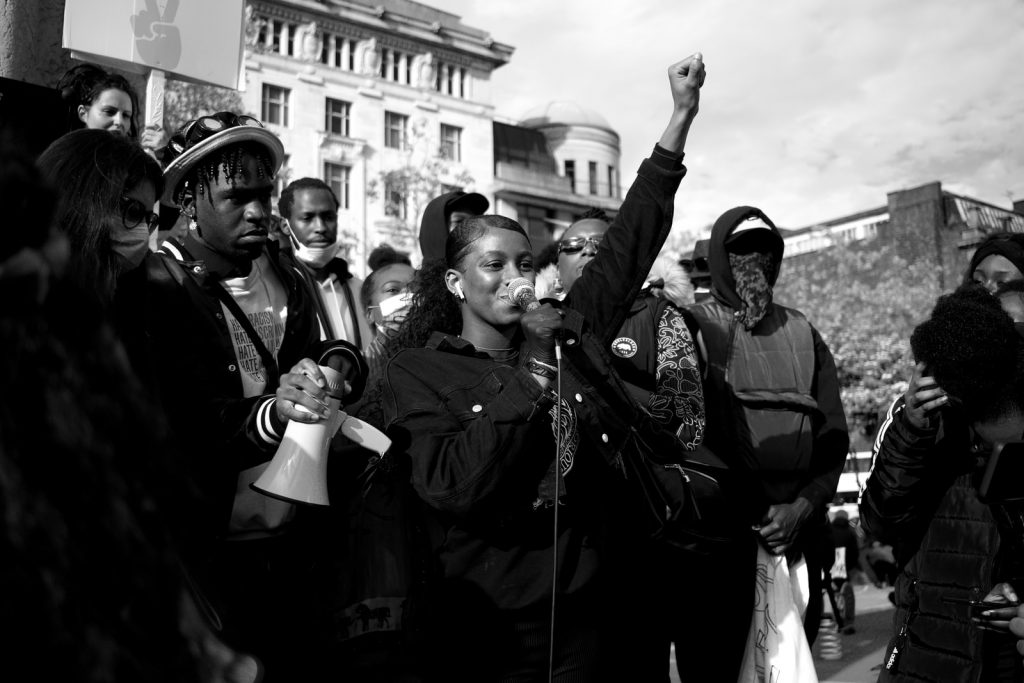 What is going on is complex. We evolved as a species to have an in-built tendency to prefer people who look like us or sound like us [8], [9]. Predispositions that evolved for sensible evolutionary reasons might now undermine a more equal, less prejudiced world. We evolved in small hunter-gatherer communities where mutual trust, loyalty and identification with one’s in-group were necessary for our very survival. Facing mortal dangers from predators and rival groups meant that in-group loyalty and cohesion were vital. We evolved to distrust the ‘other’.

We see the legacy as early as in infancy. Even babies show preference for adults who look and talk like them and like the same things as them, and they even often like people who harm people who are dissimilar to them [10]. 15 month infants like fairness but when the unfairness is to someone of another race, such preferences disappear [11] This is shocking and suggests that to combat racism we need to work against aspects of our evolutionary heritage, given how we evolved to favour people who seem more ‘like us’ [12].

Humans from infancy onwards adapt to survive and fit in, which requires learning cultural expectations and social nuances.  Not fitting in is literally painful, similar pain circuits activating in the brain when ostracised as when feeling physical pain [13]. We like and need to belong, and prefer people in ‘our’ group, even if the allocation into groups has no objective basis.  The chances of reaching out to those in other cultures and groups are further compromised as the feeling that one belongs, and group loyalty, increase self-esteem [14], so it is good for us to belong. Prejudice about ethnicity, class or nationality are extreme examples of a double-edged predisposition.

Our group biases can be extremely unsettling. In a typical experiment in America white subjects were shown both black and white faces for 30 milliseconds, too short a time for the conscious mind to register. When shown black faces, scans revealed heightened amygdala response, suggesting non-conscious fear. When the pictures were shown for long enough to register consciously, the scans showed activation in brain areas involved with conflict resolution, suggesting that the subjects were grappling with their own racism [15]. A clue as to how to manage unconscious racism comes from how, when in the same experiments the black faces were well known and held in high esteem, such as of Nelson Mandela or Barrack Obama, then prejudices were less present in white participants. This of course is but one thing we can do to make a difference, ensure we have our black role models where they belong, and if they deserve to be on a pedestal, like Marcus Rashford and the great work he has done for children and the poor, then let’s keep him and others on our billboards. There are many active steps we can all take to challenge unconscious prejudices, including those in each of us, 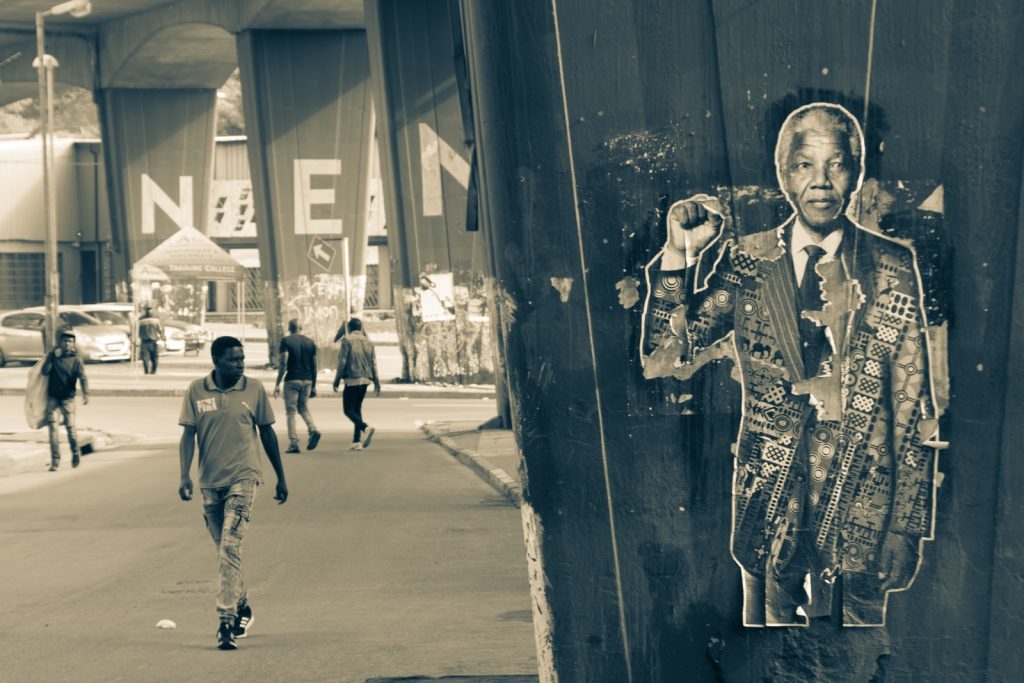 We know that stress and worry wires our brains for distrust, and this includes the effects of inequality, poverty, or living in run-down areas with more violence etc. When the chips are down and danger looms we cant afford to be open and trusting. Very fearful children, as well as abused and traumatised ones,  are much more suspicious of difference [16], and the circuitry in their brains involved in fear, are highly active [17]. People with more social fear tend to be more anti-difference, ant-immigration and, pro-segregation [18]. It is no coincidence that people on the political right tend to have higher activation in such fear related brain circuitry as opposed to circuitry central to curiosity, self reflection and empathy [19].

In one study 138 men watched films and then answered questions. Some watched relaxing images such as of beaches and palm trees, or heard soothing music. Others had to watch Sylvester Stallone’s rather terrifying film, “Cliffhanger.” The latter group not surprisingly had  heightened stress reactivity and more worryingly also had stronger anti-immigration and racist attitudes. Fear, anxiety or anger generally turn down our empathy circuits, and when our threat systems are engaged, when we sense danger, then the bodily and brain areas central to empathy, compassion and social engagement [20]–[22] turn off. This is basic survival. However the brain areas that are dominant in fear, anxiety or threat work can rather give rise to much prejudice and small-mindedness.

When there are threats such as economic downturns, increased poverty and inequality, and indeed the stresses of Covid, people become inward, and more xenophobic and distrustful of the other. We might also remember that a recent report suggested that 1 in 5 children of frontline workers are living below the breadline; that is working people! This is a moments in history to be aware of this and pull together. 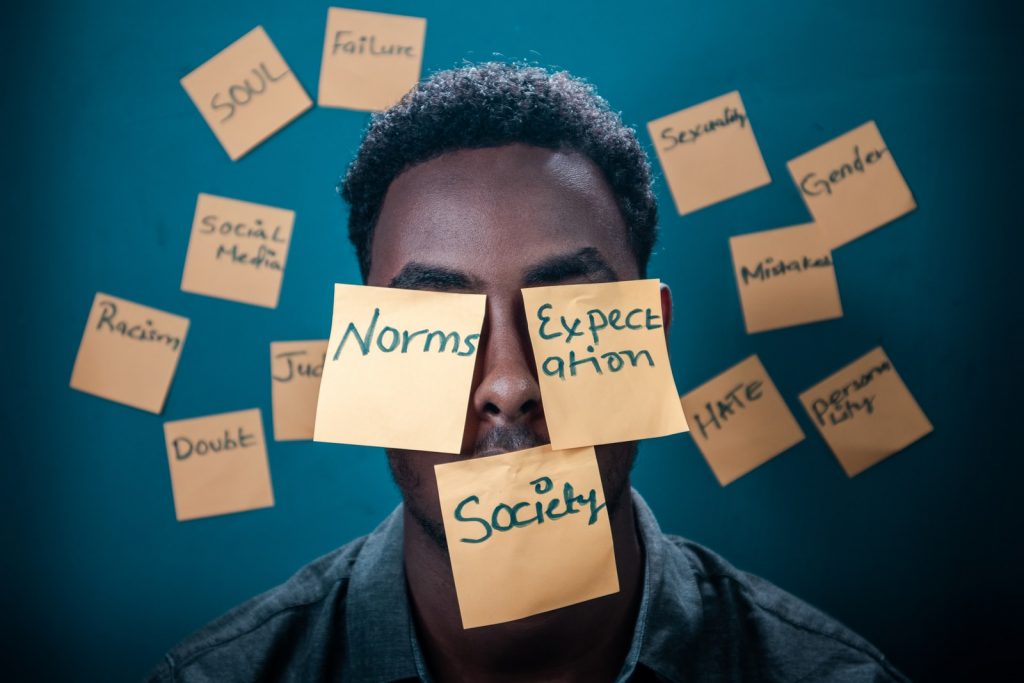 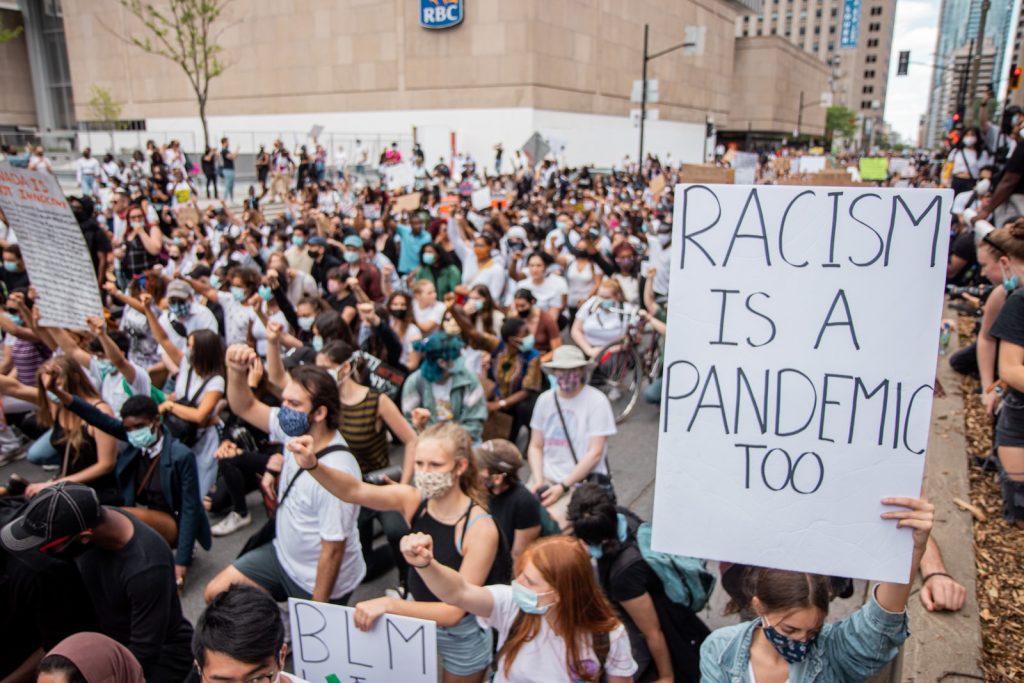 As always we can try to challenge these issues on multiple levels. We all have our own prejudices and unconscious biases and it is important that we learn to get to know them, not brush them under the carpet. We can all make a difference in our personal lives, in how we treat people, in being more mindful in our interactions. We can make a difference at the level of community, and in our roles if we have jobs. White people need to cede power and authority, which is not easy. We can all do small things which make a difference, like having more positive images of black and brown people who deserve admiration on walls and billboards. We can push for positive steps in the workplace, ensuring people from all communities are represented at the highest levels.

Yet it is also important that we all push for a society that is more compassionate, caring, empathic and tolerant, and that means helping people feel safe and giving them a sense of belonging. Human connection, trust and safeness is what breeds a less fear-inducing and more tolerant culture, and this of course starts with secure early attachments, loving and caring relationships, support for parents and children and valuing empathy and compassion. This means I believe arguing for more equality, and fighting for a less competitive culture in which the worst variants of neoliberal  capitalism are not given free rein. This means a culture in which it is ok to be vulnerable, to look after others, to be open, one that does not idealise toughness, power and ruthlessness. This should start at the top, where we should have role models who we can admire, look up to and identify with, who are not afraid to be vulnerable, kind, and reflective as well as strong. This would include not blaming the victims of society’s ills, such as blaming the poor for poverty, the homeless for sleeping on the streets, the victims of trauma for languishing in psychiatric services and prisons. Sadly, this is far from the case at the moment, but we desperately need leaders, whether of organisations or in government, who can show genuine leadership, including moral leadership. Racism needs challenging at every level, but will have less ability to thrive if we create a culture of compassion and care, in which people feel safer, and  in which our nervous systems are sufficiently at ease to be able to be open and interested in others’ wellbeing. As the graffiti says on this wall,  from the great Lemm Sissay’s poem, ‘Said the sun to the moon Said the head to the heart We have more in common Than sets us apart’. 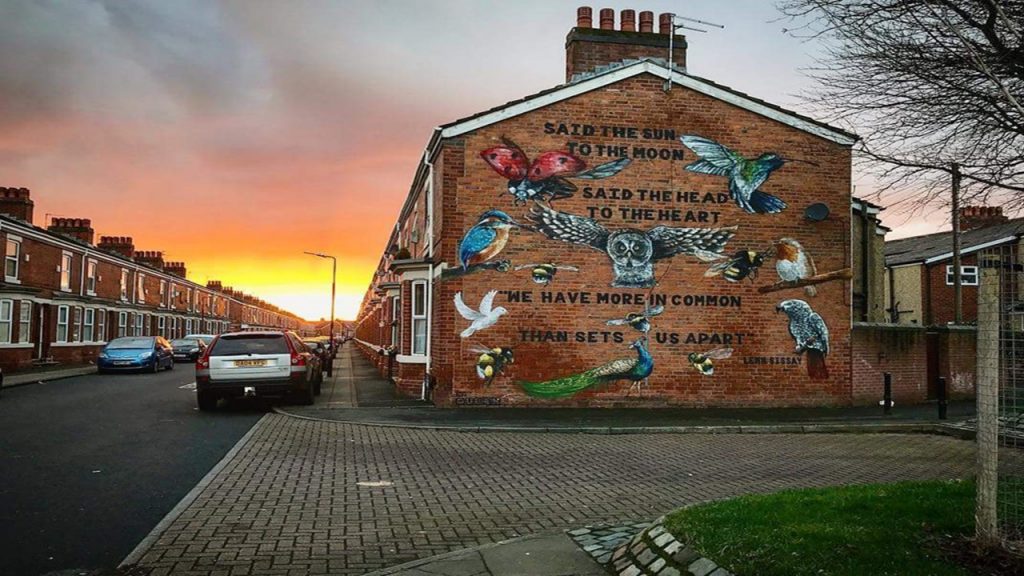 COVID, stress, trauma and why we need to prioritise children’s mental health

Childhood Obesity: A re-examination of what is really causing it